The facts regarding the circumstances under which Abdullah Ocalan, the leader of the Kurdistan Workers’ Party (KWP), was captured in Nairobi and flown to Istanbul clandestinely by the  Turkish Special Forces are not yet clear. The questions confronting an analyst are:

(a).Why did he go to Nairobi as he should have known that he might bewalking into an Israeli trap by doing so?
(b).Was the shelter allegedly given to him by the Greek Ambassador authorised by Athens or was it a rogue operation by the Ambassador for mercenary motives (for personal gain by tipping off Israel, Turkey or both about his presence in his house?)
( c )Was Ocalan waylaid and captured by the Turkish Special Forces after hehad left the Embassy as claimed by Greek officials or was he captured  inside the Ambassador’s residence by the Kenyan security forces and/or the Turkish Special Forces as alleged by KWP exiles?
(d). How did the Turkish Special Forces manage to smuggle out a druggedOcalan through the Nairobi airport without being checked by the KenyanImmigration and security? How were the Turkish Special Forces permitted
to drive the car containing a drugged and gagged Ocalan on to the tarmac and bundle him into the aircraft?
(e). Did Mossad, the Israeli external intelligence agency, and the CentralIntelligence Agency (CIA) of the US play a role in this operation as alleged by KWP exiles?

Successful counter-terrorism operations are often facilitated by fatal errors committed by terrorists. In this instance, by committing the fatal mistake of going to Nairobi, whatever be the circumstances under which he did so, Ocalan seems to have signed his own arrest warrant.
Kenya and the Ivory Coast are two African countries in which the Mossad has a very large and active presence. Its officers work there under various covers such as businessmen, academics, journalists, and advisers and instructors to the local intelligence and other security agencies, including the airport security and immigration.

Bin Laden’s International Islamic Front For Jihad against the US And Israel seemed to have chosen Nairobi for its first operation in order to convey a simultaneous message to the US as well as Israel.
Immediately after the bombing, a large contingent of Israeli rescue and salvage experts, including reportedly many Israeli security experts, had flown to Nairobi to help in the rescue and salvage work and assist the FBI of the US in its investigation.
During the enquiries after the bombing, it came out that the US Ambassador in Nairobi had repeatedly drawn the attention of the Counter-terrorism Division of the State Department to the inadequate security measures at the US Chancery buildings, but her proposals for strengthening the physical security were given low priority.
It would be reasonable to surmise that the US security agencies did so because they knew about   the active presence and role of Israeli security experts in Kenya and hence felt confident that  a terrorist operation against American lives and property was less likely in Nairobi than elsewhere. No data is available as to why Bin Laden’s Front chose Tanzania for the second explosion.
Their confidence proved to have been misplaced. Israeli experts in Nairobi seemed to have failed to detect the arrival of Bin Laden’s men in Nairobi, their preparations for the explosion and the escape of one of them to Karachi through Nairobi airport after the explosion.
Bin Laden’s men were unknown to the Israeli experts in Nairobi, but  Ocalan was a very well-known figure and his descriptive particulars were known to all counter-terrorism experts. Israeli experts would, therefore, have had no difficulty in detecting the arrival of Ocalan in Nairobi, alerting the Turkish agencies, keeping a watch on Ocalan till the arrival of the Turkish Special Forces and helping them in smuggling a drugged and gagged Ocalan into the aircraft without going through the airport security and immigration formalities.
There has been growing co-operation between the intelligence and security agencies of Israel and Turkey ever since the visit of Mrs.Tansu  Ciller, the then  Turkish Prime Minister,  to  Jerusalem in 1995. She and the late Yitzhak Rabin, the then Israeli Prime Minister, had signed an agreement on co-operation between the security agencies of the two countries in dealing with terrorism and other threats to their respective national security.
The agreement reportedly provided for not only exchange of intelligence, but Israeli training for Turkish counter-terrorism experts and Special Forces and a joint monitoring of the movements and activities of  Islamic extremist and Kurdish elements in Malta, Cyprus and West Europe.

Before the capture of Ocalan, the nature and extent of  this co-operation and the role of the US in it was highlighted by William Safire , the well-known and highly respected US journalist, in an article titled “A Phantom Alliance Reshapes the Middle East”, which was published in the “New York Times” and reproduced by the “International Herald Tribune” of  February 5,1999.
He wrote: “

Israel sides with Turkey against the Greeks on Cyprus. Two Israelis were just jailed by the Greeks for snooping where Russian anti-craft missiles aimed at the Turks were to be installed.
“The United States, not wanting to block a Russian sale, got the Greeks to put the weapons on Crete rather than Cyprus and to reduce the charges against the Israelis from espionage to possessing scanning equipment without licence.
“Israel urges the United States to sell Turkey its Apache helicopters, to use in the battle against the bad Kurds seeking to break off  a piece of Turkey.Meanwhile,
US and Israeli intelligence officers  and diplomats help track down the Turks’ most wanted Kurd, Abdullah Ocalan, forced out of Damascus by a threat by Turkey to invade Syria and now seeking refuge everywhere (emphasis ours).
“ In return, the Turks quietly help the United States support the good Kurds in Northern Iraq who may cause Saddam Hussein trouble, despite Turkish worries about autonomous regions becoming an independent Kurdistan.”

In a report datelined Jerusalem, February 18, the “New York Times” further said: “ In recent years, Israel and Turkey have forged a high profile strategic alliance that has served as a counter-weight to mutual perceived threats from Syria and Iran. Israeli pilots have trained in Turkish air space, the two countries have carried out a joint naval exercise and Israel has upgraded Turkish fighter planes.
‘There have been mutual visits by defence and military chiefs from both countries, meetings between intelligence officials and a military co-operation agreement signed in 1996. Along with intelligence-sharing, Israel has advised Turkey on anti-terrorism methods, which the Turks have used in their long war with Ocalan’s separatist Kurdish movement.
“The methods have reportedly included fencing-off and mining border areas, curfews and interrogation techniques, cross-border incursions against guerilla bases in Iraq and the establishment of a Turkish-controlled security zone there.
“ Yet, Israeli Governments have avoided taking a direct and active role in Turkey’s war with the Kurds.” 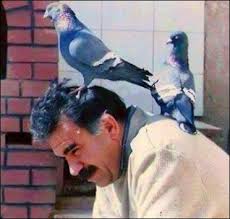 The newspaper quoted Prime Minister Benjamin Netanyahu as telling a news conference: “Israel’s activity does not include any role in the struggle against Ocalan and we did not co-operate with any element in apprehending Ocalan. We always fight terrorism and we will always fight terrorism, but we certainly had no part in the capture of Ocalan.”
The paper also cited non-official Israeli analysts as ruling out any possible Israeli co-operation with Turkey in apprehending Ocalan.
Despite this, a strong suspicion persists not only amongst Kurdish exiles, but also other knowledgeable people that the Turkish security agencies by themselves would not have been able to carry out an operation of this type from Kenyan territory

.
The successful capture of Ocalan would be a great morale-booster to the Turkish security agencies and a set-back to the KWP, but, most probably, this may not mean the beginning of the end of the Kurdish insurgency for Turkey, but only the beginning of another phase of it. Whether the new phase would be more or less violent than in the past remains to be seen.
If the Turkish counter-terrorism experts were intelligent, they would try to win over Ocalan and persuade him and, through him, his followers to agree to a peaceful, political solution providing for a large measure of autonomy for the Kurds and guaranteed respect of their rights and culture, without damaging Turkey’s national integrity.
If, instead, they try to humiliate Ocalan and try to wreak vengeance on him for the past misdeeds of the KWP, they would be letting slip an opportunity for a turning-point in their relations with the Kurds and creating more difficulties for themselves in future.
It is believed that Israeli Government officials travelling to South-East and East Asian countries used to go first to Nairobi and from there proceed to their destination since, by doing so, they were able to avoid overflying Arab countries and they were confident of the effectiveness of the airport security measures at Nairobi in view of the Israeli security officials associated with the airport security.

In fact, Israel’s co-operation with and assistance to the Kenyan security set-up are more than two decades old and it was this which partly facilitated the success of Operation Entebbe in 1977. In a brief analysis of the US bombings of Afghanistan in August,1998, ( “Indian Defence Review” of the Lancer Publications, New Delhi, July-September,1998, Vol 13 (3) ), this writer had stated as follows: “ The selection of Nairobi (by Osama Bin Laden) for the attack of August 7,1998, seems to have been due to not only the poor security at the US Embassy there, but also the close co-operation between Kenya and Israel in security matters. It is widely believed in Islamic extremist circles that Kenya has been closely co-operating with Israeli intelligence and security agencies right from the days of the Entebbe operation in 1977.”